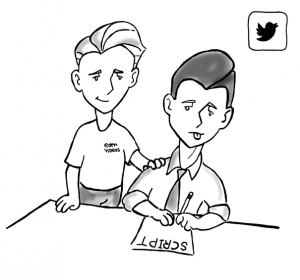 If you want to improve your video marketing results, you need to focus more on the script.

You also need to decide on the type of visuals and where to host your video, among many other things, but everything starts with your script. If the script is poor quality, your audience will just lose interest and stop watching your video. If the script is well written and a good fit for your viewers, they will stick around, remember what you say, and take the follow-up action that you want them to.

No matter what type of visuals you use, or how you deliver the final product, the script is essentially the message, and everything else should be designed around it to make it clearer and more memorable. No type of video or animation will make up for a poorly written script.

The script is the foundation of your video

Once upon a time, three little pigs set out to build houses of their own. You know how the rest of the story goes…

The first two pigs built their houses quickly out of straw and sticks, while the third pig made the extra effort to build his house out of bricks and mortar. Which one was more effective in the end? It might seem like a good idea to rush through the script and get your video produced quicker, but don’t make the same mistake, don’t make the foundations of your video weaker, otherwise when it comes time to put your video to use, it’ll just blow over.

Instead, take the time to understand what really makes a good script. There is no single perfect answer to this question. Every script is different and needs individual attention. Having said that, there are general tips that you should probably keep in mind, that are applicable to most scripts

That’s all easily said, but how do you write a great marketing video script? Here are some basic tips to get you started.

1. Make your marketing video with one clear purpose in mind and you’ll see strong and measurable results. Tweet this tip!

2. Always outline your video script before starting to write, otherwise you’ll lose focus on your main message. Tweet this tip!

3. Use your marketing video as an opportunity to tell a story, it will make the message come to life. Tweet this tip!

4. Different types of marketing video have different ideal lengths, but shorter is generally better for top of funnel marketing. Tweet this tip!

5. Don’t make your marketing video any longer than it needs to be. Longer is fine, as long as the situation calls for it. Tweet this tip!

6. One minute of video equals roughly 150 spoken words. You have to be very concise when scriptwriting for marketing videos. Tweet this tip!

8. Humanise your message. If your video is cold and robotic, your audience will not get the message. Tweet this tip!

9. Make the tone of your video appropriate to the audience. Humour generally helps, but don’t over do it. Tweet this tip!

10. Avoid jargon in your marketing videos, unless your viewers know what you’re talking about. Tweet this tip!

11. Always focus on the benefits of your business, not the list of features. Your viewers don’t care about the features. Tweet this tip!

12. Write your video script in natural, conversational language, like how you would talk to a customer over the phone. Tweet this tip!

13. People make decisions based on emotional responses. This means your video needs to make an emotional connection. Tweet this tip!

14. Give your viewers a single powerful call to action at the end of your marketing video. Tweet this tip!

15. The right call to action for your marketing video depends on where your video is being viewed. Tweet this tip!

16. Read your video script out loud to others to see if they understand the message, if they don’t, change it. Tweet this tip!

17. Put your draft script down and read it out loud tomorrow. You’ll see things tomorrow that you can’t see today. Tweet this tip!

Martin is the Creative Director here at Eden Videos. He spends his time overseeing production of whiteboard animation videos for clients, as well as building better video marketing resources... and blogging of course.