The Truth About Explainer Videos That You Don’t Often Hear 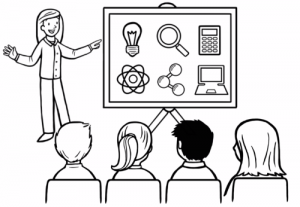 If you’ve read anything about online video, you’ve probably heard a lot of hype about explainer videos.

They’re those videos that explain perfectly what problem your product or service solves and how the customer would benefit from signing up immediately. They do a lot of good in the video marketing world, but there’s one thing in particular that you don’t often hear from explainer video enthusiasts.

Let’s start with what you do hear a lot

These are the facts and stats you’ve probably heard before about explainer videos:

Increase conversion rates by 20%, or any other percentage.

Dropbox’s explainer video increased signups by 10% which ended up being another 48 million dollars… per year!

Explainer videos are so hyped up at the moment, you’ll probably hear these kinds of facts and statistics everywhere. Yes, they are undoubtedly a great method of explaining how products work and increasing conversion rates. We don’t doubt that at all, we actually produce whiteboard explainer videos ourselves, so you won’t find us arguing against their benefits in the slightest!

What you don’t often hear about explainer videos

But here’s the truth about explainer videos that you don’t often hear:

As great as they are, they are only a small piece of the video marketing universe.

They are so hyped up because of the success achieved by Dropbox or Crazy Egg, boosting business by many thousands or millions of dollars. The problem is now everyone wants one, probably in the hope that they will have the next viral sensation video that will earn them millions. It’s almost like buying a very expensive lottery ticket.

We’re not saying that headline explainer videos aren’t important. That wouldn’t be true. But think of it like long tail SEO. Don’t put everything into trying to get the most common high competition keywords, that you forget the hundreds of little wins you get through more obscure search terms. Translation: Don’t focus so much on trying to get the one perfect explainer video and forget about the many other things you can achieve with video content.

Remember you can use video to great effect throughout the sales funnel to achieve so many different outcomes. You can use live videos to increase trust, credibility and familiarity. Build deeper emotional connections through testimonial videos and case studies. Encourage follower engagement through video games or quizzes.

Other drawbacks of the explainer video hype

The other drawback of the explainer video hype is that people forget that different rules apply to different types of video.

For example, explainer videos in general are more engaging when they are shorter, the most common guideline you’ll hear is 60 to 90 seconds at most. For what we would say is a top of funnel video, that makes a lot of sense. The purpose of the explainer video is to draw in visitors who don’t know about your product and have them understand completely by the end, and hope they don’t give up half way through.

When you’re dealing with website visitors who don’t know you very well, that sounds like a very reasonable guideline. However, there are many instances when you could use videos on your website that would need to be longer than 60 to 90 seconds, and that’s ok! When I’m looking through a familiar website and see a shiny video thumbnail on a page, I might be disappointed that the video ended at 60 seconds. What if I wanted more?

Guidance for top of funnel explainer videos, which is what you hear the most often, doesn’t apply to every piece of video marketing content that you could ever produce. If you always think about the user experience and the context of the video, the fine details like video length and structure will become apparent enough. Don’t be afraid to make something longer, shorter or whatever will work for you.

If you’re looking to get an explainer video of your own, just make sure it’s actually the right piece of content for you, not just the latest cool thing that everyone else uses. And if you’re curious about the popular whiteboard animation style, while you’re here, why not have a look through our portfolio 🙂

Martin is the Creative Director here at Eden Videos. He spends his time overseeing production of whiteboard animation videos for clients, as well as building better video marketing resources... and blogging of course.